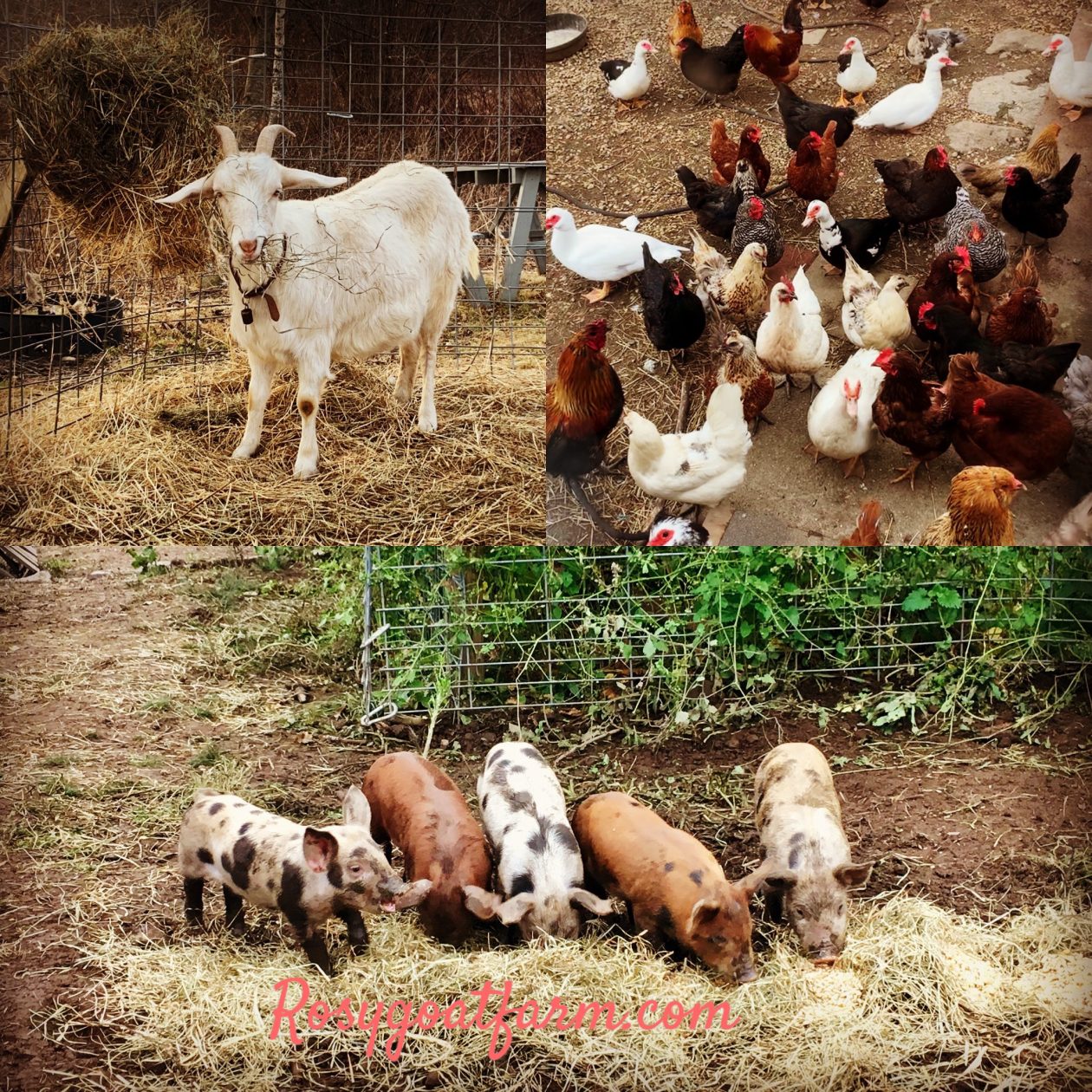 When you talk about farm help, you think of farm hands, or, people helping with the daily jobs.

But, in this case you’d be wrong. On our farm it is the animals that are the ‘help’.

The goats work hard all day clipping back the hedges, the brush, and the wild roses and vines. They balance precariously on rock walls while reaching up to cut those low-lying tree branches. They escort you around the fields and help clean up the hay or spilled feed in the back of your pick-up truck. They test the fences to make sure nothing can ‘get in’ the pastures, and if the fences have any weaknesses, they will go help the neighbors with their landscaping too, whether they need the help or not….they’re really good kids!

The pigs have a different job. They are the cultivators and rototillers of the group. They have cleared overgrown pastures, dug up saplings, rooted up wild brush, and have helped uncover even more rocks than we knew we had! They are so good at this that we set Princess Penny and Amy to the task of clearing our garden and orchard. The main garden had laid fallow last year except for perennials, (we created a second garden in the back field) and we wanted to dig out the weeds- and that invasive grass. That grass has been a scourge. It’s matted thick and its roots spread through the ground choking out the garden. Using the rototiller just cuts the roots into smaller pieces, which all become new plants. And in the blackberry patch it is impossible to control. It hides poison ivy, Virginia creeper, wild concord grape, and, snakes. (shudder) So, we sent the two girls in, fenced of a section with the blackberries, and watched to see what they would do. Would you believe that they totally dug up and ATE that grass, and those vines! AND they left the blackberries in place (except for a handful that came up with the vines.) We opened up the rest of the area. They dug out some maple and walnut saplings, rearranged a pile of logs, found more rocks, and they fertilized the whole area too. Now, that is a win-win!

The chickens worked in the garden too, with some help from the ducks. Usually they make the rounds out in the pasture eating ticks and weed seeds. They happily followed Princess Penny and Amy diligently and raked out the ground for us, while locating and devouring any of the weed seeds they found. The ducks (and the pigs) feasted on the Japanese beetle grubs. Here and there a hen would lay an egg along the wall of the orchard, (too busy to go to the nest-box) but Amy took care of that. She loves eggs. And, lastly our friendly roosters watch the skies and the perimeter for predators. We have five roos, and they each have their clique of about 8-10 ladies- and an area of the farm that they’ve claimed. They sound an alarm that you can NOT ignore. They crow hysterically loud, and fly into action on a moments notice. I’ve witnessed a rooster jump five feet into the air, and meet a hawk in mid flight. There was and epic battle that lasted 5 seconds as the rooster stabbed him with his spurs- hawk feathers flew everywhere, They tumbled to the ground, my valiant fighter was back on his feet in a blink and the hawk flapped over to a tree 20 feet away. His ego was bruised. I picked up my brave boy and checked him for wounds, but i couldn’t see any blood, and he stomped off to boast of his success to his ladies- and to the other roosters of course!

I am very grateful for all their aid. Now that’s permaculture at its best! My farm help also offers comic relief. The things I’ve seen them do just cracks me up. Stories for another day…

Seriously- i am not joking- it’s kidding season!

Our momma Kiko goat had her twins a few days ago. It was her first birthing, and she handled it like a trooper!

When i came out to give her and her sisters breakfast, she had them both all cleaned up, and they were dry and on their feet looking to nurse. And they’re adorable. And friendly. And sooo soft! Squee!

I knew she was tired and hungry, so i set up her feed nearby, topped up her hay and water, and, while she ate i was able to check them over. Both were boys!

She crooned even while eating, and their tiny kid bleats would melt your heart. Such sweetness!

There’s always work to be done on a farm.

Each season brings it’s own set of jobs. Early spring is when you update your internet presence, and your marketing plans. You go to farm conferences, you attend workshops. You pour over seed catalogues and plan the garden, and, planting the seeds you’ve decided upon. You renew your farm memberships and certifications. There’s paperwork. There’s taxes. Time flies by!

And there’s livestock coming and going. Investing in new stock, selling some, sending some to market, and, yet more being born. That’s the fun part- the newbies! Little chicks and ducklings, piglets and kids. The brooders fill up, heat lamps go on, the little feeders are brought out of storage….

With the warmer weather there’s paddocks to be fenced, gardens to be prepared, housing to be cleaned up, repairs to be made. Busy busy busy!

And, like all families, there’s places to be, errands to run, dinner to be made, and downtime is needed to hang with the family. That is the best part of all, being home with the family.